How drinking alcohol affected my training and health

I wanted to share my journey with drinking alcohol. It is very relevant because it is something most of us struggle with. We know it’s unhealthy and counterproductive for training, but it’s also a great way to relax and socialize. How do you find the balance? This is something I struggled with for a long time. Today I have found a much better balance, but I’m still not perfect. I hope this post helps you find the balance you’re searching for.

Drinking at college was a big thing for me like most people. I came in as a naïve freshman without much knowledge of the party or drinking scene. By senior year I had explored it all. The journey between freshman year and senior year involved parties, bars, and weekday drinking. Freshman year I started to go to the typical college parties. They were fun, but I didn’t drink that much since it felt a bit uncomfortable. Sophomore year things changed. I got in with a group of friends, so parties became a lot more fun. I enjoyed kicking back and having a few beers. They didn’t affect me, so I was happy to indulge. I never woke up the next day feeling hungover or sick.

I had grown comfortable with drinking alcohol by junior year just in time to turn 21. The bars opened up a whole new type of drinking. Happy hour and high drink prices (for a college student) inspired pre-gaming and heavier drinking. I always drank for fun, but sometimes it felt like we drank more to relax after a long week. By senior year a lot revolved around parties and drinking. Some weekends began to get hazy. I began to wake up hungover and sick. My health slowly deteriorated. It had become an unhealthy relationship.

Forming a New Relationship with Drinking After College

After college, I still did not have a good relationship with drinking alcohol. Whenever I was surrounded by people who were drinking, I still overindulged waking up feeling horrible the next day. However, just from the consequence of not being surrounded by it all the time, I was able to reduce my drinking time. I also had less time since I was working full time. My healthy eating helped me lose weight, and I found myself drinking less on the weekends.

Getting in better shape after working

I still enjoyed drinking and found it to be a respite from a hard week. I also found that it was focused on most of my social situations. Every event besides training and working out had a drinking component. It was what I did to socialize. My drinking was contained for the most part, but sometimes I would still have one of the hazy nights I had in college. This resulted in poor food choices and lack of motivation. For the most part, however, drinking wasn’t really important.

When I broke up with my girlfriend, I was sent into a downward spiral. I was emotional and drinking alcohol began to fill the gap. Nights out became very hazy. My drinking never became a problem, but the weekend and social events were centered around it. I felt healthy during the week, but the effects of drinking alcohol on the weekend stayed with me for days afterwards. I was sluggish and I had trouble thinking. My environment did not help since most of my friends were doing the same thing.

I did not realize how I had regressed, but looking back it was obvious. I felt healthy for the most part, but my drinking bouts seemed to erase all of that. My weight stayed the same, but my body did not feel good. Trying to deal with the emotions around the breakup had created a negative connotation with drinking alcohol once again.

My Realizations and the Path Forward

As time progressed I had gotten over my breakup. I needed some time to absorb and find my own way. I realized how I had been using drinking alcohol to help me to work through my emotions. This realization combined with my new focus on training helped me develop a better relationship with drinking alcohol.

The change came slowly, but my new training goals ensured I stuck with it. I began to drink much less often and less when I did. I stopped drinking Bud Light and began to drink more enjoyable craft beers. These beers allowed me to slow down and savor the flavor.

My increased training load ensured that late nights filled with drinking alcohol were few and far between. Getting up early and training made staying up late not worth it anymore. I still had a few nights every now and then, but for the most part, I concentrated on what was important: completing my first half marathon and a half ironman. My old group of friends faded into the background. I began to hang out with people that were more aligned with my goals. Social events were no longer centered around drinking.

What I Learned about Drinking Alcohol

I had a long a varied journey with drinking alcohol over the years. It had its ups and downs and a varied relationship. Sometimes it was a negative relationship and sometimes it was positive. Today, I found the balance I have been searching for. I still enjoy a few drinks, but I find no reason to overindulge. I enjoy social situations more now, and I enjoy the few drinks I have. My body feels better and my drinking style matches my health goals. I may still have a few “bad” nights, but for the most part, I feel great about my drinking habits. 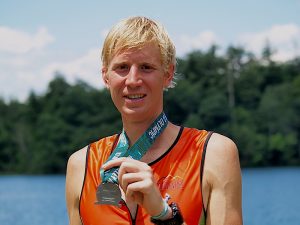 Racing with me new found balance

My environment has also changed. I don’t have as many of the negative influences around me. With my new drinking balance, I surrounded myself with people who were more aligned with my goals. This has helped me stick to my goals while still enjoying the occasional craft beer.

How to Find Your Balance

Drinking alcohol can be a tough area for people. It makes social scenarios easier, and we are constantly surrounded by it. Finding that balance can be very difficult. My recommendation is to think about the relationship you have with drinking alcohol. Is it positive? Is it negative? Be realistic with yourself. List out all the reasons you may be drinking. Make sure you aren’t drinking alcohol to fit in or to get over a tough week. It should be something you enjoy. Not something you use to get through your emotions.

Align your drinking with your training. A heavy training load will naturally make you drink less. You are much more likely to want to wake up and conquer your training goals. Don’t let drinking alcohol limit you from reaching your racing goals. This will also help you adjust your environment. By surrounding yourself with more like-minded people, you are more likely to stick to a more sustainable habit. Drinking alcohol is not always a bad thing. Slowly decrease your drinking if you identify a negative relationship. Your body will thank you. It may be a long process like me, but it’s worth it!

What kind of relationship do you have with drinking alcohol? Have you had any struggles in the past? How do you find the balance between drinking alcohol and training? Let me know in the comments!

Any cookies that may not be particularly necessary for the website to function and is used specifically to collect user personal data via analytics, ads, other embedded contents are termed as non-necessary cookies. It is mandatory to procure user consent prior to running these cookies on your website.